Paraguay, another Honduras on the making? Interview with Fionuala Cregan 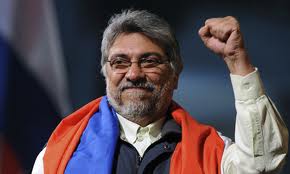 On 29th July we interviewed Fionuala Cregan on the Paraguayan crisis, its background and the Latin American context in which it takes place. She is based in Argentina and works with the Latin America Regional Office of Church World Service. She has also written for the Irish Times on Paraguay and has extensive research on the impact of agribusiness on Paraguayan peasants' lives. She has been a long term supporter of LASC. The views expressed here are her own. We hope that this interview will give a better insight into the developments in that country.

1. Some people, in fact most Latin American leaders, have deplored the destitution of Lugo as a thinly veiled coup with a constitutional disguise. The Vatican, Spain and Germany, on the other hand, have stated this is a constitutional process and as such should be respected. What is your view on the recent political crisis in Paraguay?

It took just 24 hours for the Paraguayan parliament to kick out democratically elected President Fernando Lugo. He was given neither time nor space to defend himself. This is in violation of due democratic process and thus amounts to a parliamentary coup. For this reason, Paraguay has been suspended from the regional trading bloc MercoSur as well as from the Union of South American Nations (UNASUR), a union modelled on the EU focused on regional integration.

It does not come as a surprise that certain European countries have not condemned the coup. The Vice President, Federico Franco, who was immediately sworn in as President is supported by and represents the interests of large rural estate-owners and the business and industrial chambers. Paraguay - a small landlocked country in South America  is the fourth largest producer of soy in the world much of which is exported to Europe for use as biofuel and animal fodder. The extension of the agricultural frontier for soy cultivation has lead to the eviction of hundreds of thousands of small scale farmers or campesinos from their land and has created a major land crisis. While Lugo was not able to resolve this crisis, he opened up spaces for dialogue with the campesino sector and attempted to find solutions. This was not well viewed by large estate owners or soy production companies and they have been waiting for an excuse to oust the President and replace him with one favourable to their interests and those of European investors.

As for the Vatican, it has never supported Lugo as it regards him as a dangerous Third World Bishop linked to the philosophy of Liberation Theology. This theology which interprets the teachings of Jesus as liberation from unjust economic, political, or social conditions grew in South America during the 1960s and was very soon condemned by the Vatican which excommunicated a large number of priests who practised this theology. The Vatican attempted to prevent Lugo running for President in 2008  as a result of which he resigned from his role as Bishop and continued his Presidential campaign. The Catholic Church in Paraguay was one of the first organizations to congratulate the de-facto President Franco.

2. The Parliamentarians in Paraguay have expressed shock and outrage at the Curuguaty massacre. Was this an exceptional event in class violence in Paraguay?

The death of 6 policemen and 11 campesinos in Curuguaty and wounding of 50 more is a deplorable event. However, in my opinion, it does not represent class violence. This is the label that was created by the right wing pro business media in Paraguay and used as a justification for the subsequent ousting of President Lugo.

As mentioned, the extension of the agricultural frontier for soy production has had a profound impact on campesinos many of whom now find themselves landless and forced in to the urban slums of the capital Asuncion or into occupying land that is not in use and demanding land redistribution.

Curuguaty is a city in Eastern Paraguay near the Brazilian border. The violent events of 15 June took place in a estate belonging to land owner Blas Riquelme  a former colleague of dictator Alfred Stroessner who ruled from 1954-1989  and today closely linked to the Colorado Party, owner of a supermarket chain and lucrative investments in livestock. During the dictatorship he illegally expanded his estate to appropriate 2000 hectares of fiscal land  in other words land that belongs to the Paraguayan State. It is this piece of land that a group of landless campesinos were occupying and demanding its return to the State.

On 15 June a group of special police forces, on the request of Blas Riquelme and with an eviction order from a judge and state prosecutor, arrived at the estate. On the way they were ambushed, supposedly by the campesinos, and a battle ensued leading to 17 tragic deaths.

The police were members of an elite force who had been trained in Colombia on counter insurgency techniques. Many ask how could this specialised force have fallen in to a trap such as this? Had the Police intelligence service been sabotaged? Was it all a perfectly staged event to criminalize campesinos and oust President for his supposed incompetency in managing these events and for having dialogued with this criminal sector?

According to Paraguayan Journalist Idilio Mendez The plan was to criminalize, to provoke extreme hate for Campesino Organizations, in order to force campesinos to abandon the countryside and leave it for the exclusive use of agribusiness. Events in Curuguty are part of a slow, painful process of De-campesinisation of the Paraguayan countryside which directly threatens the food sovereignty of the Paraguayan people.

3. Many people have said that at the heart of this coup are the land owners and their powerful multinational allies in agribusiness could you give us some background to the rural conflict and to the current state of land concentration in the country?

Paraguay is one of the most unequal countries in the world. 85 per cent of the land is in the hands of 2 per cent of landowners the majority of whom have mansions in Miami or Punta del Este, bank accounts in fiscal paradises and maintain strong ties with the agribusiness industry, including US giant Monsanto, and are linked politically to the two main political parties in Paraguay the Colorados and Liberales. It is these people who control the Paraguayan Parliament and who ousted President Lugo. One of the first steps taken by the new Minister for the Interior was to cancel the Protocol for dialogue with Campesinos who occupy land.

4. Has there been any significant resistance in Paraguay to these new developments? Do you think that a campaign of national resistance can be in place? Franco was speaking of preventing a civil war. How deep do you think is this crisis?

There has been resistance from social movements in Paraguay but these movements are not yet strong enough to provoke the levels of resistance seen in other Latin American countries following coup attempts.

Paraguay lived through one of the longest dictatorships in Latin America with 60 years under Stroessner which was followed by a democratic dictatorship under Strossner´s allies, the Colorado Party. The election of Fernando Lugo as President in 2008 was the first ever break with Colorado rule and marked the first true opening up of spaces for civil society and social movements.

However Lugo lacked the political will or courage to implement any of his campaign promises of agrarian reform. He opened up dialogue  but there were few changes in the lives of thousands of landless campesinos and indigenous people who felt that Lugo played too much to the interests of the right.

As a result social movements became divided with some continuing their support for Lugo and others focusing on construct their own political movements. These internal divisions explain the lack of a stronger resistance on the streets of Paraguay these past few weeks.

5. Do you think Paraguay is another Honduras on the making?

There are many similarities. Both are small countries dominated for centuries by a powerful elite who are not afraid to spill blood to defend their interests, where the United States has a vested geopolitical interest with important military bases in both and where civil society has suffered a long history of repression. Zelaya in Honduras and Lugo in Paraguay represented the first fledgling steps towards social justice  and the elite responded with brutal force. Since the coup in Honduras 3 years ago, this country is now one of the most dangerous places in the world to be a human rights defender.

The difference however lies in Paraguay´s location in South America where its powerful neighbours Brazil and Argentina are lead by left leaning Governments and who alongside all other governments in the region have condemned the coup and taken concrete political measures against Paraguay. The de-facto government of Federico Franco will not be able to act with the same impunity as Lobos in Honduras. In addition even before the coup, there were elections scheduled for 2013. Both national and regional dialogue and political negotiating in this process, as well as the reunification of social movements will be key to ensuring that Paraguay does not become another Honduras.

Related Link: http://www.lasc.ie
http://www.indymedia.ie/article/102108
Indymedia Ireland is a media collective. We are independent volunteer citizen journalists producing and distributing the authentic voices of the people. Indymedia Ireland is an open news project where anyone can post their own news, comment, videos or photos about Ireland or related matters.