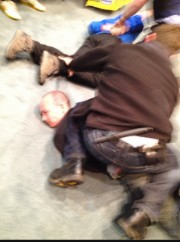 The long arm of the bond-holders

Campaigners against the property tax  who staged one of a number of peaceful protests at Councils today  have questioned why Gardai at South Dublin County Council used brutal and unnecessary force against them, including some plain clothes Gardai. Cannisters of pepper spray were also waved at locals who were manhandled and handcuffed. One is currently being kept in Tallaght Hospital for observation of his injuries.

Aaron Nolan (aged 19, now in hospital):
I was standing in front of Shane Donnelly when one of the uniformed police pulled me to the ground. I stood up and tried to get in front of Shane again. A stocky man, with a light blue hoody, who I thought was one of the protesters, grabbed me and pushed me against the wall. He then grabbed my head with his two hands and smashed my head against the wall. I fell on the ground and when I was on the ground, he choked me with his two hands. I was dazed and unable to stand as he handcuffed me.

Eddie Ericsson, Tallaght :
Why does it seem like the police were prepared for a confrontation? Are tactics like this what is to be expected to intimidate normal working class people into accepting austerity?

Pat Waine, Greenhills:
The heat of working class anger was felt by Labour party councillors when anti-property tax protesters took the fight to the South Dublin Council Chamber. Ordinary householders peacefully protested at the Council meeting causing it to be abandoned.The police wielding pepper spray used heavy handed tactics to remove protesters. Householders were thrown to the ground and handcuffed in the council chamber in an appalling attempt by the police to bully protesters into submission. Our resistance to these unjust taxes will continue and intensify.

Phil Foster, Tallaght:
We were holding a peaceful protest in the council chamber when two Gardai arrived, followed by plain clothes and uniformed Gardai. They grabbed Paul Murphy (MEP) and Pat Waine and threw them to the floor. One Garda put his knee into Pauls back and neck. He grabbed his hand and made a fist shape of it and pushed it into the floor to put immense pressure on Pauls fingers and knuckles. Paul shouted out in pain. The other Garda had Pats hands handcuffed behind his back and was kneeing him in the back and ribs. Ive never seen anything like it before, neither had any of the other people there.

There were several occupations of councils this evening. Fingal, South Dublin and Kilkenny.

A peaceful occupation of Fingal Council building in Swords, Dublin was held by activists of the Campaign Against Property Tax and Austerity (CAPTA). facebook.com/CAPTADublinWest

Kilkenny Borough Council occupation
At last the councillors feel the anger of people facing the property tax, the water tax and other austerity measures
By: Campaign Against the Household & Water Tax Carlow/Kilkenny

These people are heroes for representing half a million householders... Everyone has a right to a peaceful protest in a public space - calling the Gardai is akin to a dictatorship and alarming....... Janey Mack

Caption: we will rock you water boys

They're a nasty breed those plain clothes Gardaí with the wide arses that they use to intimidate people exercising their rights. They seem as though they come from some sort of cloning lab somewhere. The force they use is particularily vindictive and petty with no regard for the long term injuries their krav maga inspired moves can cause. They're out of the same nest as the new breed of the protein shake security thugs , great in a swarm but complete paper tigers in a straight fight. They work for big business interests , and dare you get in the way little ant , that's what they exist for and they'll snap your arms trying to stop you from standing up for yourself. But it's like a native American friend tells me , 'Their time is coming to an end'.

Funny how the gardai are out in force for these corrupt members of the public,but not around for the isolated vunerable people living up and down the country of ireland,in fear of burglary,arson,and theft etc..
Shame on the gards.

Fair play to the protesters,they are speaking for the people of ireland,we dont deserve this shit.

The banks and excesses of certain politicians landed us in this,they should have to pay it off,its funny how they didnt cut their 100,000 + salaries and expenses but expect us to take all the pain?

Leaders are supposed to show example.

This is not a democracy.

Where are gardai priorities??FFS..You will see a great gardai presense for a couple of peaceful protests ,but where are they when a house out in the country is being robbed,and people being assualted?

With garda stations closing down,where is the focus...only on a couple of protesters,not the victims of crime.

Its just great how they can co ordinate themselves in large numbers for a couple of protesters,its a pity they dont put the same energy into protecting members of the public from crimes such as burglaries and inner city muggings up and down the country

And the excessive force used for people holding a banner,shame on them.

Garda priorities are defence of the 26 county state

what do you expect from a pig only a grunt.

The idea of community policing is a myth, the gardai have been behaving like this since day one, especially the uzi carrying special branch thugs.

Incidents like this serve as a good wake up call. the gardai are political animals,

They may have taken part in the march against austerity but they are still the first line of defence between you and the state.

The beat elderly women to the ground in rossport, pepper spray activists in cork for postering,
frame up republicans through the use of emergency legislation in the (non jury) special criminal court.

The message as always from the gardai is you can protest as long as it doesn't get results.

just be wary of puttin pics up if any of them could be used in court. i know when ones outraged ya wanna let everyone know and show people but in the long run if yis are gonna put in a complaint ya dont wanna give them any ammo ya know yersmelf

http://www.indymedia.ie/article/103267
Indymedia Ireland is a media collective. We are independent volunteer citizen journalists producing and distributing the authentic voices of the people. Indymedia Ireland is an open news project where anyone can post their own news, comment, videos or photos about Ireland or related matters.