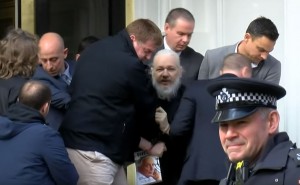 Julian Assange being dragged out of Ecuadorian Embassy

Julian Assange who helped setup Wikileaks and in one of the first set of leaks revealed the murderous campaign of the US military against innocent civilians in Iraq amongst many other leaks showing the systematic criminality and inhumanity of the US government was betrayed this morning by the right wing corrupt president Lenin Moreno of Ecuador. Former Ecuadorian President Rafael Correa  whose government granted Assange asylum in 2012  branded his more pro-US successor Lenin Moreno the greatest traitor in Ecuadorian history for rescinding the asylum claim and allowing British officers to enter his countrys embassy.

At the moment in a damage limitation exercise to try and shutdown support for Assange the corporate press is saying if charged, he could face up to 5 years in prison. This is to make it not so bad, but we can be 100% sure if deported to the USA, they will have a long list of dubious charges and most likely will give him a prison sentence that will more than easily cover the rest of his lifespan for that is the way of such regimes.

Other Coverage Worldwide outrage over arrest of WikiLeaks publisher Julian Assange | Former UK ambassador Craig Murray denounces arrest and conviction of Julian Assange | Amid corruption scandals and deals with IMF and Washington, Ecuadors government betrays Assange | Exposing collateral murder and mass surveillance: Why the world should be grateful to Assange | Every charge against Julian Assange, explained | Ecuador SITREP: How Corrupt History Repeats Itself | 'Our property now': (Most) US lawmakers rejoice over Assange arrest | Roaming Charges: Tongue-Tied and Twisted | Hillary Clinton shows signature style as she chuckles over Assanges arrest | Toe the line or go to jail: Tulsi Gabbard (2020 candidate) says Assange arrest is a message to Americans | The Martyrdom of Julian Assange | Daniel Ellsberg on the Importance of Julian Assange | Citing Assange's Work Exposing US 'Atrocities,' UK Labour Leaders Speak Out Against Extradition Effort | Why Julian Assanges Extradition Must Be Opposed at All Costs | The Assange Arrest is a Warning From History
Some previous Indymedia coverage: OCCUPY MEDIA VID (14 mins) solidarity with Julian Assange at Supreme Court | LONDON - Julian Assange speaks from balcony of Ecuadoran embassy marking 6 months. | Julian Assange Has Been Nominated for Nobel Peace Prize of 2019 | We Will Not Be Gagged: Wikileaks |

To help put some background on this story, here is some reportage from the WSWS.org coverage:

Assange was dragged out of the Ecuadorian Embassy by a group of British police officers. Even as he was being brutally manhandled into a police van, Assange challenged his persecutors, The UK must resist this attempt by the Trump administration The UK must resist!

Assanges expulsion from the embassy and his arrest are unprecedented crimes, said James Cogan, the national secretary of the SEP (Australia). A journalist and publisher, who has committed no crime, has had his asylum terminated and has been dragged off to prison in violation of repeated UN rulings upholding his status as a political refugee.

The attack on Assange is directed against the democratic rights of the working class. It is aimed at creating a precedent for the suppression of mass opposition to war, austerity and dictatorship, Cogan added.

The arrest of Julian Assange by a Metropolitan Police snatch squad is a political crime for which the Conservative government of Theresa May and the Ecuadorian government of Lenin Moreno are politically responsible, said Chris Marsden, national secretary of the Socialist Equality Party in Britain.

The arrest took place after police were invited into the Ecuadorian embassy by the ambassador and following what UK Foreign Minister Sir Alan Duncan said was extensive dialogue between our two countries. Behind the scenes the Trump administration in the United States is orchestrating events.

The Socialist Equality Party denounces this conspiracy. We will do everything in our power to mobilise the broadest protest movement by workers and youth against what are preparatory moves to extradite the Wikileaks founder to the US in clear violation of international law.

At around 5:37 a.m. US Eastern time, WikiLeaks confirmed Assanges arrest, tweeting: URGENT: Ecuador has illegally terminated Assanges political asylum in violation of international law. He was arrested by the British police inside the Ecuadorian embassy minutes ago.

Several minutes later, WikiLeaks tweeted: URGENT: Julian Assange did not walk out of the embassy. The Ecuadorian ambassador invited British police into the embassy and he was immediately arrested.

British Home Secretary Sajid Javid immediately took to Twitter to declare: Nearly seven years after entering the Ecuadorian embassy, I can confirm Julian Assange is now in police custody and rightly facing justice in the UK. I would like to thank Ecuador for its cooperation & @metpoliceuk for its professionalism. No one is above the law.

The bail charges against Assange are politically motivated and were resolved years ago.

The transparent purpose of the WikiLeaks founders detention by the British authorities is to facilitate his extradition to the US. This was confirmed by Assanges lawyers, who stated that he was arrested not only for the bogus bail violations, but also after an extradition request from the US on fabricated conspiracy charges.

The Trump administration, with the support of the Democrats, is seeking to prosecute Assange for his role in WikiLeaks exposure of war crimes, mass surveillance and illegal diplomatic intrigues

Collateral Murder -Why the thugs in USA/UK wanted Assange. Crime for revealing shocking video of what these governments do -murder innocent people in faraway countries

Frame from the Collateral Murder video a moment before the US military blasts these un-armed civilians away. For the crime of revealing this, the thugs behind the levers of power want to put him away for the rest of his life and send out the message to us all that we should never dare to oppose but instead lap up their lies and spin. 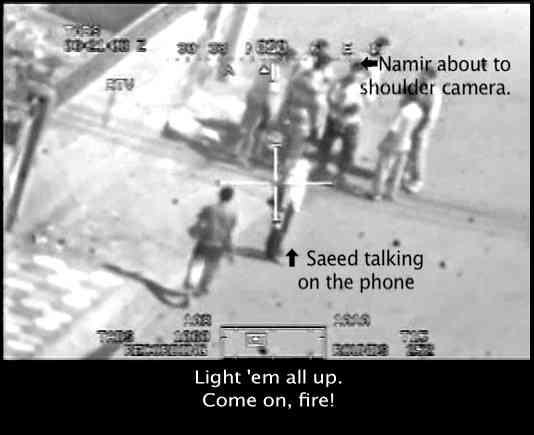 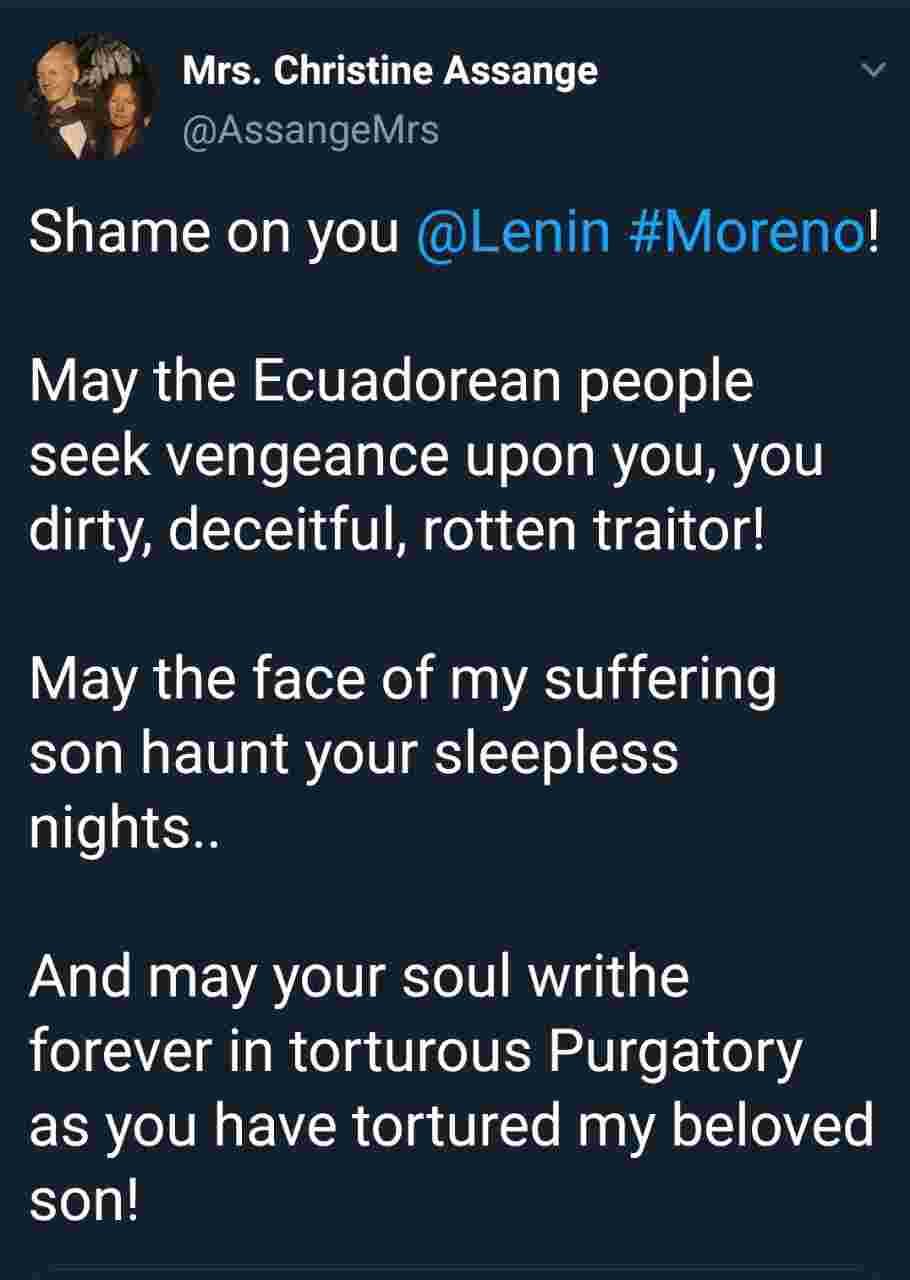 Outside Westminster Magistrates court in central London supporters of WikiLeaks publisher Julian Assange rallied to his defence. Assange appeared at the court Thursday afternoon after he was arrested and dragged from his place of political asylum at the Ecuadorian embassy in London.

Judge Michael Snow found Assange guilty of bail charges that date back to 2012, ordering him to appear at Southwark Crown Court at an unknown date. He could face a sentence of 12 months.

Supporters of WikiLeaks demanded that the UK government reject US demands for Assanges extradition.

The UK government has confirmed Assange was arrested on behalf of US law enforcement authorities. The US has charged Assange with computer crime over documents published by WikiLeaks. If Assange is extradited to the US, he will undoubtedly face more serious charges under the Espionage Act, threatening life in prison or the death penalty.

During a brief hearing Judge Snow gave voice to the state vendetta against Assange, attacking the award-winning journalist as a narcissist, telling him to get over the US and get on with your life and describing as laughable his claim he had not received a fair hearing.

Among the supporters of Assange outside the court was former British diplomat, whistle-blower and human rights activist Craig Murray. A long-time supporter and friend of Assange, Murray spoke to the World Socialist Web Site after witnessing proceedings inside the court. 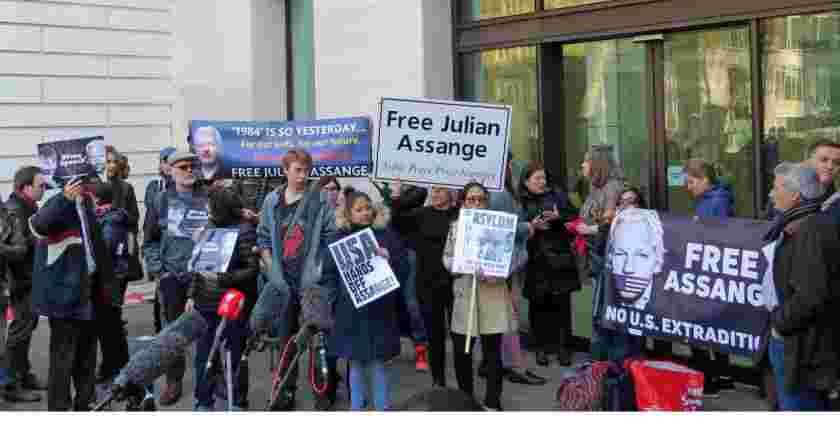 What we have seen today is extraordinary. Its amazing that you can be dragged out of somewhere by armed police and within three hours brought up before a judge and found guilty of a crime involving a serious jail sentence. There was no jury and no chance to mount a proper defence or have a proper hearing.

It is clear the judge was extremely prejudiced. It was very short hearing today and he cannot possibly have formed during that time his judgement that Julian Assange is a narcissistic personality.

That plainly shows that he must have formed his judgement from what he had read in the media before he ever came into the court. That judgement could not possibly be formed in the few minutes in the court. There are serious reasons to question Judge Snow and about the quality of justice that has gone on here. It is a case of extreme prejudice. There is no way anyone could call what has happened a fair trial.

Julian Assange has provided an important service. There is no evidence of anybodys life being in danger. If there had been, we would have told about it by now.

Then there is the truly appalling behaviour of Ecuadors dreadful President Moreno. He has not only curried favour with the United States and UK but sold Julian out.

One good thing, if you wish, that has come out of this is that now we are talking about extradition. We can now see what all of this is really about. It is about freedom of the press, about Julian being charged with publishing the revelations made by Chelsea Manning. From day one this has been about the United States wishing to lock Julian up for the Chelsea Manning leak exposing serious American war crimes in Afghanistan and Iraq.

The whole Sweden case has been a charade. It has always been about whether a journalist should be punished for publishing leaked documents showing a government offending against international law.

I am hoping, maybe a long-shot, that the media pundits of a liberal disposition will realise that this is a fundamental threat to press freedom. If anyone who publishes a US leaked document wherever they are in the world can be dragged to the US and imprisoned, then the American government is going to have impunity for its crimes for ever more. All journalists must decide where they stand on this fundamental test of media freedom.

Copy of collateral murder from Wikileaks in case it disappears from YouTube 206.35 Mb

http://www.indymedia.ie/article/106960
Indymedia Ireland is a media collective. We are independent volunteer citizen journalists producing and distributing the authentic voices of the people. Indymedia Ireland is an open news project where anyone can post their own news, comment, videos or photos about Ireland or related matters.