The Battle Against the Bin Tax

The Role of Socialists in the Working Class Movement 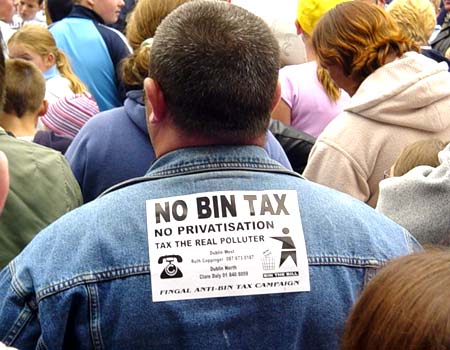 One of the most significant struggles to affect working class people in Ireland in recent years took place in the autumn of 2003. This battle was between the anti-bin tax campaigns and the combined power of the four councils covering the whole of Dublin, the Fianna Fail/PD coalition government and the Irish state. The battle against the bin tax exploded in September 2003 and was a dominant national issue for the rest of the year.

This peak of the ongoing campaign against the bin tax saw households across Dublin refusing to pay the charges, thousands of people taking to the streets, dozens of blockades of bin trucks and 22 people imprisoned. It also saw considerable disagreements emerge amongst different elements within the campaigns. The most visible of these disagreements was over the issue of blockading bin trucks in other areas of Dublin when the struggle in Fingal was underway. The Fingal Campaign and many activists in the rest of Dublin believed that it was necessary to escalate direct action across the entire city. Some others, particularly some forces within the City Council campaign, felt that doing so would be rash.

The Socialist Party, which has played a very prominent role in the anti-bin tax campaigns, has produced a lengthy document outlining what it sees as the key elements of these disagreements. This is not a straightforward historical account of the struggle. It attempts to record the main developments in the battle against the bin tax, deal with the role of socialists in the campaign and to draw lessons for future campaigns.

The differences of approach that emerged relate directly to what is the best way to build campaigns and conduct struggles. They also relate to the role that socialists should play in the rebuilding of the working class movement, which everybody agrees will be a vital issue in the years ahead. The issues re-surfaced again in the build up to the local elections in June 2004 and have continued on the bin tax and around the debates on how and when to establish a new left party for working class people. The differences are current and very relevant and undoubtedly will come up again and therefore need to be clarified.

http://www.indymedia.ie/article/71354
Indymedia Ireland is a media collective. We are independent volunteer citizen journalists producing and distributing the authentic voices of the people. Indymedia Ireland is an open news project where anyone can post their own news, comment, videos or photos about Ireland or related matters.