Reconfiguration, Centres of excellence - Buzzwords for privatisation and screwing the worker 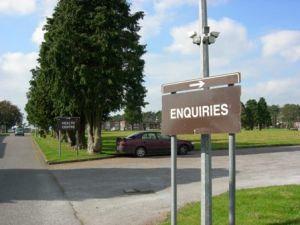 Paula Walters of SIPTU takes some enquiries on the HSE

Brendan Drum of the HSE had earmarked the St Marys Orthopaedic Hospital in Cork as next in line for his cuts. But workers at the hospital are intent on fighting back and not accepting this. Kevin Doyle interviewed Paula Walters, SIPTU member, and a hospital attendant with over 30 years experience at the hospital.

Q:To begin with Paula, for those not familiar with Cork and its hospitals, what sort of place is the Orthopaedic?

A: The hospitals main business is with bones and it specialises in hips and knee replacements, and broken legs. Mostly people who come up to us have something like that the matter with them. Thats what it specialises in. There are others area too like Plastics and Physio too. The Orthopaedic was one of the first of its kind in the south of Ireland. It opened 53 years ago. Its on the North side of Cork, in Gurranbraher, the last hospital of any size in what is a huge area of Cork city. It has big grounds. Its a homely hospital  its small and a lovely place to work in. A lot of peoples families worked there over generations. Its a very calm hospital in a way.

Q: How many are working there now?

Q: People will be familiar with the cutback in the Mercy Hosptial and the ongoing refusal by the HSE to fund the opening of the new A & E there. Whats been happening at the Orthopaedic?


The interview continues after the jump...


A: There been small stuff happening over a while. In July we lost Block 3 which was a male and female trauma unit. We werent sure what was going on  they said one thing and did another. We shouldnt have accepted that. But we thought it was just a switch around. Actually we are not sure if management know them half the time what theyre doing  thats the honest truth. They said there wasnt enough activity in Block 3 and, as it was the smallest, they were going to move it. Actually that wasnt true at all. It was bursting at the seams really. There was a full complement of patients there day and night. I do night duty. Anyway since then we have been more careful.

Q: Now there is new threat against the Orthopaedic. When did you hear about this?

A: We read about then in the Evening Echo newspaper! Can you believe it? So I contacted the Michael Murphy, the hospital manager, and he said it was nothing new and that it had been discussed with us. Which it had not. He said they were talking about bringing Community Care into us but Community Care will be only one or two blocks. And in actual fact there is no guarantee that anyone of us will get any jobs in there anyway.

Q: The big threat is to the orthopaedic services?

A: Yes. They want to move Orthopaedic and Plastics out to Cork University Hospital in Wilton and have them all under the one roof out there. Its crazy. For one thing all the facilities now at the hospital, the clean-air surgeries which cost a fortune, will all be lost  down the drain. X-ray would then go too. It would be a massive blow. And to go out to Wilton, to CUH. Everyone knows there is no room to move out there. Whereas with us there is lots of room and everyone agrees that the grounds are beautiful.

Q: So is it a good idea to move the big specialties to CUH?

A: If there is a need to modernise ...Like the surgeons are saying they need a brand new hospital. Fine, maybe they do, but why dont they build it at the Orthopaedic, and still bring Community Care on board and create employment rather than be downgrading our hospital. We have made suggestions, but everything we come up with has been knocked on the head. All they say is that the powers that be have made a decision. In reality theres a long term plan to down-grade the hospital. For example the Orthopaedic has been promised a Rehab centre for a long time  for over ten years that has been a promise. There is a big need for that. Otherwise people have to go up to Dun Laoghaire and that is hard when you are from Cork and Kerry or Limerick  its a big burden. That could come here. It was promised for here. So the hospital as it is has huge potential.

Q: So what do you feel is going on? Why the broken promises and why the less than subtle move to serious downgrade the present hospital.

A: We feel they want to bring in private developers and get the land. Its worth tens of millions. They want private developers to take it. And we fear that they want ultimately to put another private hospital in there. If they get away with the co-location in Wilton with Beacon, then whats to say they wont do the same up with us when they get their hands on the grounds? The reality is they dont want to develop the present hospital for the ordinary worker. If an entirely new arrangement is put in place then you can bet the jobs in any such private hospital will not be our jobs. Who are they going to bring in to work there? Were on nearly 17 an hour  but that wont be on offer with any of them. Theyll have contact cleaners and everyone on contracts  thats what they want.

Q: There are cuts facing other workers in the health services. How do see the broader situation?

A: Someone put it well at a recent meeting I was at. In order for the private health sector to succeed the public sector must fail. Isnt that true? So that is where the cutbacks are coming from, I feel. The HSE are chipping away all the time. They take on no new staff. I work on night duty, but you could end up on doing two or three job because some else is out or sick. You dont mind giving a hand but this is happening on a regular basis. We should have five attendants on night duty but we end up with three. Its not the same for nursing staff. They always have a full complement. But it seems the cuts are coming to us, the non-nursing staff and weve given years of service.

Q: What is the present situation?

A: What really upsets us is the manner in which we are being keep t in the dark. Jerry Dwyer still hasnt commented on the Echo article... Thats what they are like. But you have to keep in mind too that sometimes, if you ask me, they dont know what they are doing themselves. I mention earlier about the Block 3 closing in July, the male and female trauma unit. Well, credit this, they still had electricians in on upgrade work in there when it was closed! So they were actually pumping money into the block to refurbish it as they closed it! Then they turned around and said well put Physio in there, so they ripped all that work out that had been done on Block 3, and now they are doing it up for Physio to move into. More money going down the drain. But anyway, back to the main point. When we ask whats going on we get these words from them like reconfiguration and centres of excellence. Its all that kind of stuff and they are all buzzwords for privatisation and lets screw the ordinary worker, in my view.

Q: What action do you intend to take.

A: There is a lot of anger now about all these so called plans. WE have got onto our official Joe OCallaghan (of SIPTU) and he is doing something now. He originally said in the Echo that he agreed with the plan to move the specialties to the CUH! But we challenged him and he took that back. He has requested a meeting with the HSE. But we are holding meetings too and there is also a protest called for outside City Hall that we will all go down to. Were going to protest there. We dont want to lose these jobs. We have a fierce backing behind us and we are not going to go quietly. Weve given a lot of service. They will try to split us by saying some jobs will stay if it is downgraded but we dont want that. We genuinely dont. We want the hospital kept and we want it invested in.

Related Link: http://www.wsm.ie/story/4591
http://www.indymedia.ie/article/89434
Indymedia Ireland is a media collective. We are independent volunteer citizen journalists producing and distributing the authentic voices of the people. Indymedia Ireland is an open news project where anyone can post their own news, comment, videos or photos about Ireland or related matters.