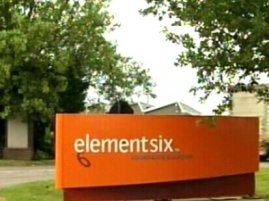 Element Six - Get ready for more of the same

Element Six/De Beers plan to shut their Shannon plant, sacking 370 workers, and move production elsewhere is a disgusting stab in the back of the workers whose hard work has made them billions in profits over the years.

After huge sacrifices, including working part time on the promise that this would save jobs, the company now want to pack up and jump ship, with only a pittance of a redundancy. The entire cost of the redundancy scheme to the company is only 6.6m, about one weeks turnover for the factory, according to the Irish Independent!

Note: This article was written before managment started discussing an "alternative" proposal saving "some" jobs, probably only a stay of execution, and demaningd much reduced wages, terms and conditions. Therefore, the need for a fight still very much stands

These actions are motivated purely by greed. De Beers is a profitable company, making $3 million in the last year. The order books for many Element Six products are full. But they want more profit and dont care if livelihoods have to be laid to waste in the process. They plan to throw hundreds of workers on the dole, in order to move elsewhere to pay slave wages of around 3 an hour.

With over 400,000 on the live register, and predictions that this will rise to 600,000 next year, job losses mean many workers face long term or even permanent unemployment. For some, there is no guarantee that they will work again. Just so Element Six can make more profits, workers face struggling with mortgages and loans, while living on a dole which faces cuts.

If they get away with this, more companies in the region and around the country will follow suit. If these jobs are let go they will not come back. There will be a legacy of unemployment in the region into the future. This is why as well as fighting for better redundancy, workers need to fight to save the jobs.

Action and occupation can get results
A strong fight, reaching out to workers across the region and the country, can put a stop to the company's plans. Element Six must be forced to open up its books, and show where the profits from the last 40 years have gone. The workers should demand that these profits are reinvested to safeguard jobs, and provide a decent redundancy package for those who want it.

The company will attempt to tie workers up in endless negotiations, and hope to deflate the anger and mood for action, in order to be able to sneak out the back door. Workers should not let this happen. In reality, it is the level of organisation of the workers on the ground, and their willingness to take firm action that will wring concessions out of management. As the recent electricians' strike shows  strong industrial action, not endless talks, gets results. In particular a struggle to save jobs would get huge support from ordinary people throughout the region and indeed the whole country, but even if it comes to redundancies, taking action can drastically improve redundancy terms.

Recently workers in Visteon (Ford) in Belfast and Waterford Crystal occupied their factories and successfully won better redundancy payments. Element Six workers should consider building on the sit-in protest of February, this time to establish a complete occupation of the factory. This would ensure the company removes no equipment, materials or finished products, and give the workers a real bargaining chip.

Demand the Government Act
The government cannot be allowed to sit idly by as jobs are axed, unemployment rises and factories gather dust. Element Six workers should organise to put pressure on the government to take action to stop the jobs massacre, and to actively create jobs. This is a vulnerable government, facing a referendum and elections. A strong campaign which reaches out and involves workers across the entire region in mass protests and other such actions., could force them to act.

If De Beers are not willing to safeguard jobs, then the factory and resources should be taken into democratic public ownership. If the government can spend billions bailing out corrupt bankers, then there is no reason why they cannot come up with the initial investment for research and development, and whatever retraining and retooling is needed to safeguard these jobs, or immediately provide alternative employment. The one thing that is both unviable and unthinkable is to allow any more jobs to disappear.

I do agree with this and I think its happening all round but a lot of the redundancies at present are piecemeal, in companies where workers are denied union representation by management and unions themselves have their heads in the sand on the issue. To make things worse, the tax payer is subsidising the move of Irish jobs to cheap locations by the 60% PRSI rebate. Employers are now talking about havinga "budget" for redundancies. What is needed is proper representation to empower workers to be able to do something, because right now there is nothing.

At very least employers who are making workers "redundant" to move their jobs elsewhere should not be subsidised in doing so and forced to pay a much higher level of statutory redundancy. Only employers genuinely closing down or in real financial difficulty should receive help from the state in this way, not those who are only going to use it to increase their profits elsewhere.

working in e6 used to be a badge of honour, something to be proud of and to be thankful for. It has however become abundantly clear that we are becoming surplus to requirement in deBeers insatiable appitite for profit. Be under no illusion, the Shannon plant is not losing money, the Shannon plant is not under
skilled or under trained, the shannon plant just costs too much compared to third world economies and yet our government preaches that we should engage
in a race to the bottom with these countries and disable ourselves in the process by becoming a cheaper country to do business in. Well, drop taxes and services for companies in ireland and stop letting the worker pay and take the blame fo everything, "THIS IS NOT OUR FAULT".

What happens to us in the future when the "Knowledge based economy" that our government aspires to, is caught up with by these poorer countries? Where do we turn to then? More people are forced onto the dole que by GREED, more companies are pulling out of Ireland due to GREED, more families are being destroyed by GREED all brought about by the need to fed this out of control egotistical elephant in the room, GREED.

Enough is enough NOW, not when it affects you and yours but NOW, because as the song says, " If you tolerate this, then your children will be next"
I am not going to tolerate this and will fight along with 369 others for what is just and right a long as I can.

Disillusioned but not broken.
Slan

http://www.indymedia.ie/article/93335
Indymedia Ireland is a media collective. We are independent volunteer citizen journalists producing and distributing the authentic voices of the people. Indymedia Ireland is an open news project where anyone can post their own news, comment, videos or photos about Ireland or related matters.