Gardai Give Back Ploughshares Hammers to Activists 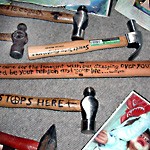 Ciaron O'Reilly writes: ''...Shannon Airport felt spooky. The last sight of the West by most of the 4,000 young Americans who passed through its small "departure" lounge to their deaths in Iraq. Spooky, too, as I reflected on an Irish society so integral to facilitating the killing yet so disengaged with the escalating and expanding war. Most U.S. troops in Iraq have passed through this small rural out of the way airport.

Spooky as I reflected on my own disengagement from the ongoing suffering. Have I, too, learned to live in an Ireland with the transit lounge for death that is Shannon Airport?...''

A collection of hammers and other objects that were used to disable a US Navy plane in 2003 were turned over by Shannon gardai to one of the activists who carried out the action.

Veteran anti-war direct actionist Ciaron O'Reilly will hold a press conference outside Shannon Airport 12 noon Wednesday July 24th., following the return of hammers used to disable a U.S. Navy war plane at the airport in Feb 03. He will bring the hammers and other reurned property to the press conference.

O'Reilly was one of the Pitstop Ploughshares group, who along with Deirdre Clancy, Nuin Dunlop, Karen Fallon and Damien Moran were charged with $US 2.5 million criminal damage to a U.S. Navy war plane at Shannon in the build up to the invasion of Iraq. The group were intially imprisoned on remand in Limerick before being put on trial three times at Dublin's Four Courts. They were eventually acquitted unanimously by a jury at the Four Courts in August 2006. The groups action is the subject of Dublin journalist's Harry Browne's forthcoming book "Hammered by the Irish - How the Pitstop Plougshares Disarmed a U.S. War Plane with Ireland's Blessing!".

O'Reilly is a veteran of three such Ploughshares actions in as many countries. Ploughshares actions take their inspiration from the Old Testament prophecy of Isaiah "to beat swords into ploughshares" and are attempts to disable military equipment employing hammers in an acts of nonviolent direct action. The movement began in 1980 by the Berrigan brothers and other radical Catholic pacifists. Some ploughshares activists have received sentences ranging up to 18 years imprisonment for such actions, while others have been acquitted by juries. Although perceived as a small radical component of the broader peace movement, ploughshares communities have attracted such notable counsel as former U.S. Attorney General Ramsey Clark, present Solicitor General for England and Wales Vera Baird, celebrated human rights lawyer Gareth Peirce and in Ireland they were represented by Hugh Hartnet, Michael Higgins and Brendan Nix.

Two of the hammers returned by the Gardai had been used by O'Reilly and the ANZUS Ploughshares group on New Year's Day 1991 when they disabled a B-52 Bomber after breaking into an upstate New York U.S. Air Force Base on the eve of the first Gulf War. O'Reilly served 13 months in a variety of U.S. prisons for that action. One of the hammers being returned has been used on five occasions by various ploughshares groups in the United States, England and Ireland racking up $US 7 million in damage to military equipment destined to contribute to wars in Iraq, East Timor and nuclear weapon systems.

O'Reilly stated, "Since we acted five years ago at Shannon Airport over 1 million Iraqi's have been killed in the war we tried to stop. Also 4,000 young Americans soldiers, most who passed through this small departure lounge at Shannon Airport have also been killed and returned home in body bags. Another 20,000 U.S. soldiers, most who passed through Shannon, have returned home with amputations, loss of mind and other injuries from which they will never recover. In the past five years this small civilian airport on the west coast of Ireland has become the central U.S. military hub to refuel its troop movements to the war zone.

The hammers, bible, koran and photos we recovered from the Gardai today are in the truest sense "property", what is proper and nourishing of human life. The military equipment that passes through Shannon is anti-property that has destroyed the very infrastructure that sustained life in Iraqi society. President Bush's war escalates in Iraq and Afghanistan, it expands into Lebanon, Somalia, northern Pakistan and soon possibly Iran. The relevant response in these times is nonviolent resistance and solidairty with those who resist whether they are from civil society or within the military itself."

Indymedia.ie Contributor Book To Be Published:
'Hammered by the Irish' by Harry Browne deals with the militarisation of Irelands Shannon Airport in service of the U.S invasion and occupation of Iraq - Now available at CounterPunch.org

http://www.indymedia.ie/article/88451
Indymedia Ireland is a media collective. We are independent volunteer citizen journalists producing and distributing the authentic voices of the people. Indymedia Ireland is an open news project where anyone can post their own news, comment, videos or photos about Ireland or related matters.